Dafang, an ancient dilapidated village in China, was given a new destination. Thanks to the Dutch Institute for Heritage and Marketing (IVEM), in collaboration with NEXT Architects Beijing, Total Design and the government of Jinxi County, Dafang Holland Creative Village was created and offers a mix of Chinese and Dutch creativity and culture. 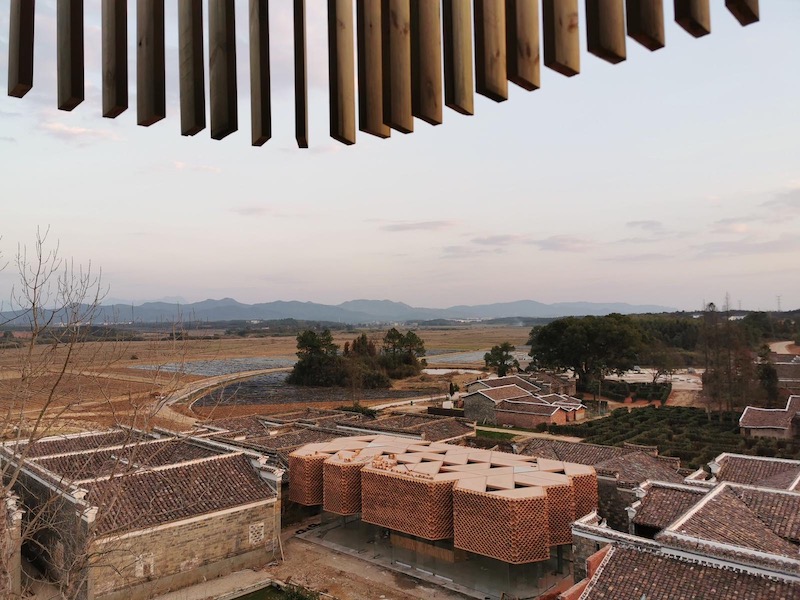 How do you give centuries-old villages, abandoned by gentrification, a tourist boost? The local Chinese government asked the Netherlands Institute for Heritage and Marketing (IVEM) to develop a concept that could serve as a model for many other villages. Herbert-Jan Hiep (IVEM): 'A letter of intent has been signed by our country and China to work together in various cultural areas, such as film, museology, Design and music. China has a massive stock of cultural heritage and wants to do something constructive with it. In 2016 the Chinese embassy in the Netherlands sought contact and proposed me to organize a Dutch – Chinese forum together in the Netherlands. We agreed that Cultural Heritage would be an excellent new subject for cooperation between our two countries. We organized the conference in April, and there I came to meet experts from CCMG and Tsinghua University.' 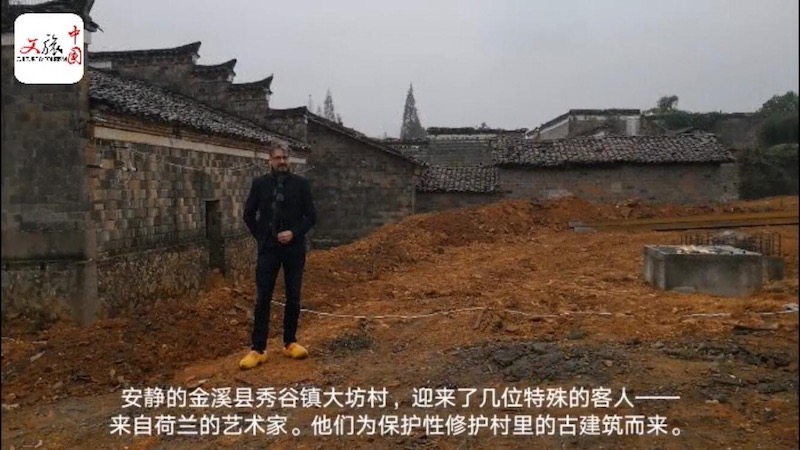 A new life for older buuildings

We showed the Chinese experts around and told them about our vision ‘Our story is: to properly protect an area, you cannot make a museum of every historic village or ancient building, it will be too expensive and not manageable. To make old places and buildings survive, they must get a new function. We call this “conservation by development”. The Netherlands carried out a ten-year study, supported by three ministries, to shape that. How do you give old buildings a new life? How does history come to life? For example, from this thinking, creative breeding grounds were created. Places where creative people can meet, work and inspire each other. That idea is applied to this project in China. The experts from the forum invited me to China. After visiting many interesting places, I met with the mayor and other notables of Jinxi County, an area the size of our province of Utrecht in the southeast of the country, with over one hundred ancient, and partly empty villages. There is where the project started.' 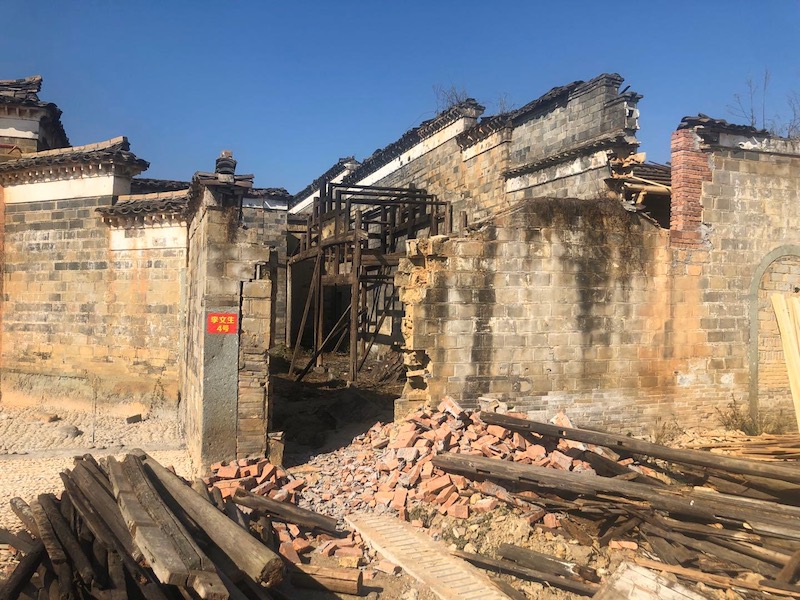 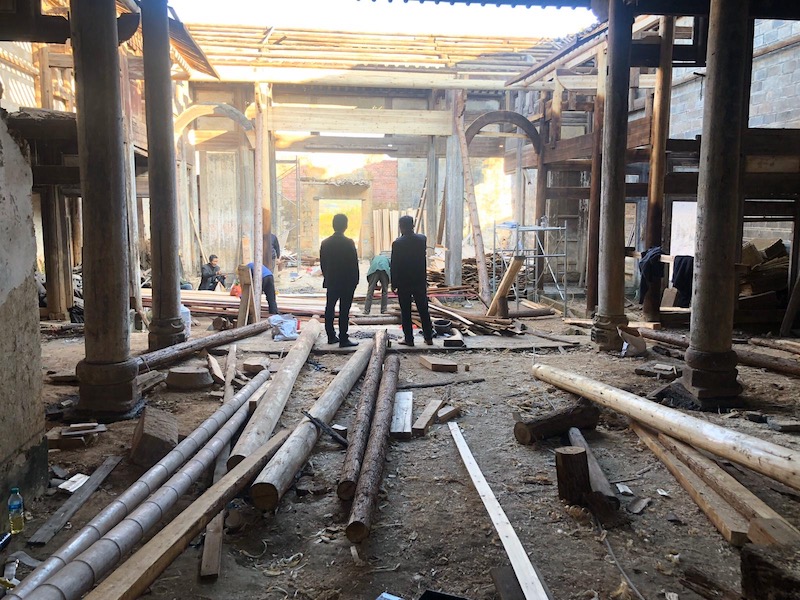 In September 2018, Hiep organized on the request of the local government, a workshop in Jinxi with cooperation partners Roel Wolters (SMARTLAND Landscape Design), Linda Vlassenrood, curator in urban development and John van de Water of NEXT Architects Beijing. "We looked at many of the beautiful villages and came across Dafang, a very derelict village with large areas of land around it," says Hiep. "It met our four requirements: not too big, not too far from the main town, not too heavily protected and with enough space to add new things. We proposed to build one or two new iconic buildings and restore the rest and create space for exhibitions by artists and designers. In a week, we were able to submit a plan for Dafang Holland Creative Village. '

Unlike in the Netherlands, the Jinxi County-funded project in China has already received a lot of publicity, including in CCM Daily and CCTV (China Central Network TV ) of China Cultural Media Group (CCMG), government media with a vast reach. After the plans where agreed upon, the building process started. The village officially opened in March but low profile: due to the corona crisis, the planned opening festival with the Dutch embassy and Dutch and Chinese musicians, dancers, designers and artists was postponed until travel is possible again. 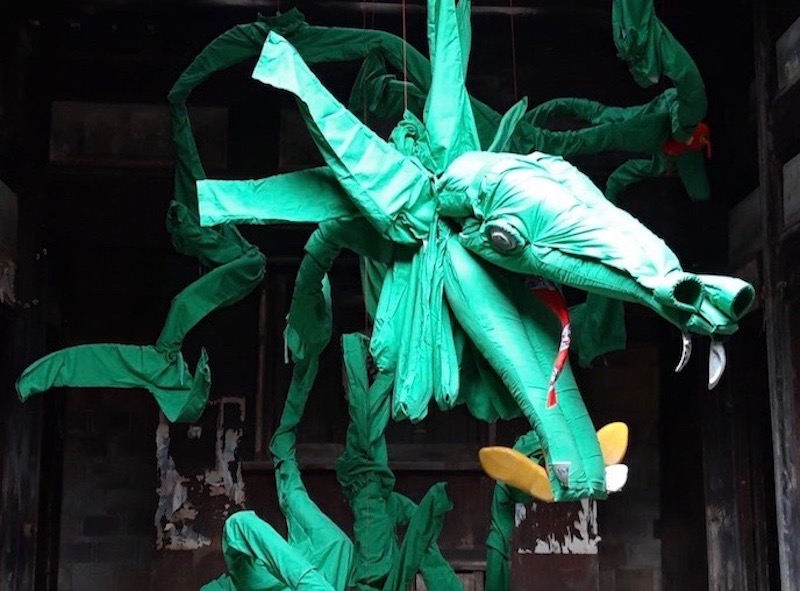 One of the artworks made on the location: 'Dragon' composed of green trousers by André Pielage.

The new destination of the village is to show two cultures and boost creativity. Space was created for projects in the fields of art, Design, museums and creative agriculture. In the summer of 2019, the redevelopment of Dafang was already in full swing, eight Dutch (and four Chinese) artists had the opportunity to work on location. Paul Segers ,  Maartje Korstanje , Nico Parlevliet , Tanja Smeets , Herman Lamers , Rob de Vree , Wouter Klein Velderman  and André Pielage  made objects and installations in and around the village that fit into the cultural heritage of both China and the Netherlands.

At the same time, a design by NEXT for two new spectacular buildings were realized. A bee-hive building, the Camphor Tree building, forms the central café. It is inspired by the thousand-year-old camphor tree located in Dafang. Hiep: 'We noted down stories of residents in the area and learned that the village once had a defensive work and possibly also a kind of watchtower. That has become the Dragon Tower; we call it Wandering Tower. The tower offers a view of the valley with beautiful nature and rice fields. It shows the connection between the village and the valley with farming lands. A connection that existed for maybe a thousand years and is now waning.' 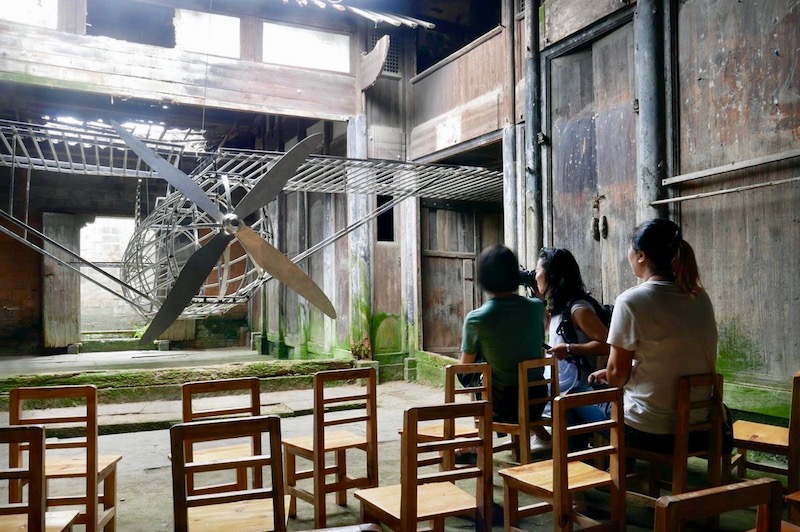 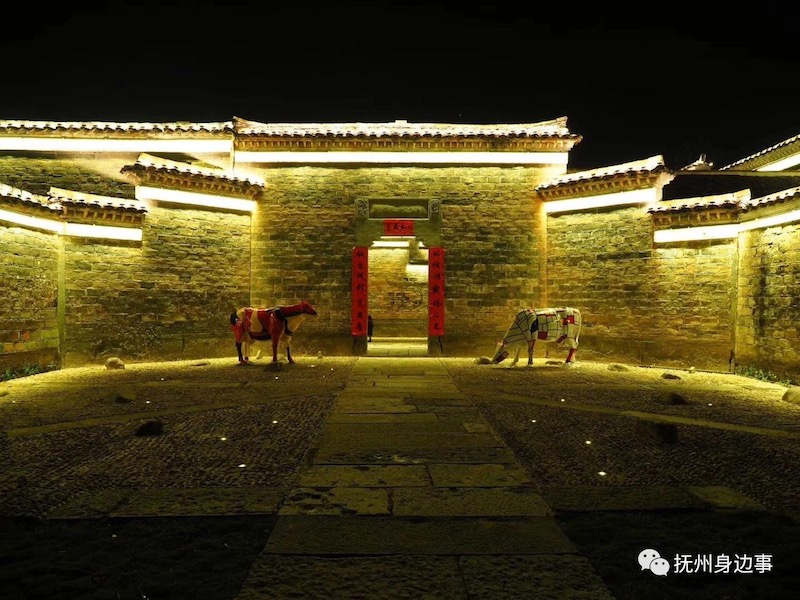 When the average foreigner thinks of Holland, mills and tulips, appear in his mind's eye. Hiep: 'That was also the association of our Chinese clients, with a tourist goal: after all, people must be attracted to come here. However, we also wanted to create something more in our creative tradition, with at least one sleek, modern building and spaces where contemporary artists, designers and other creatives could gather and work. We were hesitant: are our concepts well understood in China, and rural areas? Do they function as they do in the west?'

Part of the interpretation of the concept by the clients was different (read: much more colourful) than the makers had in mind. Hiep: 'The final structure was grey, but once it was delivered in its completed condition, we noticed that the sleek, Escher-like building we envisioned had been given an extra dimension: primary colours in Mondrian design were projected onto it.' There where cows also in these same designs. And that's not necessarily bad, he eventually realized. "They have added value to it. Both parties have made concessions. It has become a real mix of the Netherlands and China.' 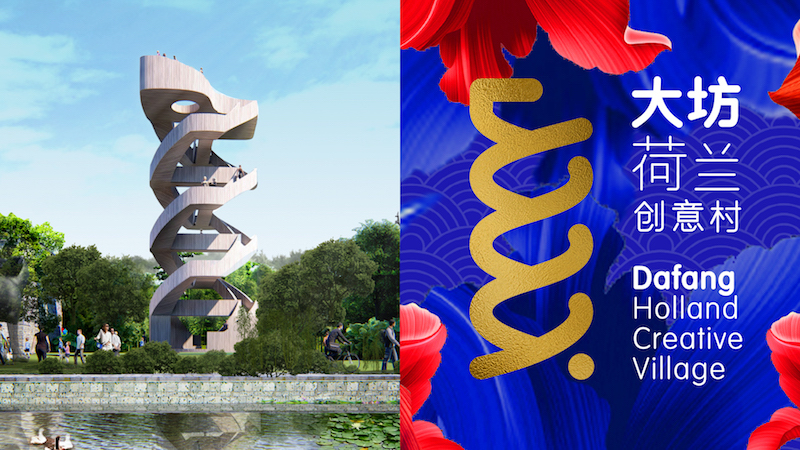 Total Design was asked to design the visual identity of Holland Creative Village in Dafang.

Partly due to their work for FloriWorld , the new Flower Experience centre in Aalsmeer, Dutch design agency Total Design was asked by IVEM to develop the visual identity. 'We expected to find a lovely place, hidden between jasmine and lavender,' says Hugo van den Bos, head of branding at from the designers. 'This is partly the case because Dafang is also located in an area that is important for the supply of raw materials for the worldwide perfume industry. And suddenly there is Dafang Holland Creative Village this summer. There was no special relationship between Dafang and the Netherlands, but our country is popular, and the association with flowers is quickly made. There is even a first field with tulips. The ease with which things are assembled into something new in China was an eye-opener for us, also in the process. Just as easily, elements from different concepts are combined, and ideas are added. In the beginning, it took some getting used to, but gradually you learn to deal with it and even appreciate it. We have now decided to stop worrying about copyrights. Everything we make is no more than a point in time that will spur new points in time. Throw it out into the world, see what others add to it, and who knows what fruitful it will bring. And that fits in very well with these open-source times. As long as it works and gives energy.' 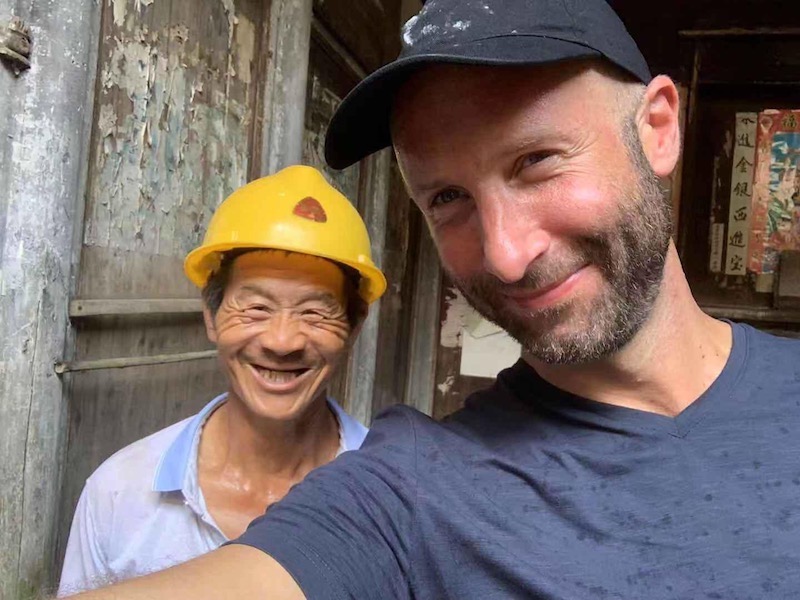 That Chinese collage-thinking, unhindered by ‘our’ western design concepts with rigid rules, is something that also charms Hiep. ‘The country is fundamentally different, and that is inspiring for artists and creatives. There is so much energy in China, and there is so much intellectual food. Criticism is expressed differently in China; direct criticism is the loss of face. Politeness is deep: people are generous with praise. In some things, they are better than us. You learn by doing. Deng Xiaoping once said: “Crossing the river by feeling the stones”: trying step by step and adjusting where things go wrong. Westerners are more inclined to immediately think in concepts and then when the plans are thought over many times with many people only then they implement it. We are cerebral and conceptual in advance. But because it is not possible to oversee all consequences in advance, it can be better to start, creating, doing or building. Then you've got something to reflect on. As a creative, you have to add water to the wine and look at something from a Chinese perspective. Discuss your discussion points, dare to put things into another perspective and let go of your rigid way of thinking. Then you come up with something new.’ 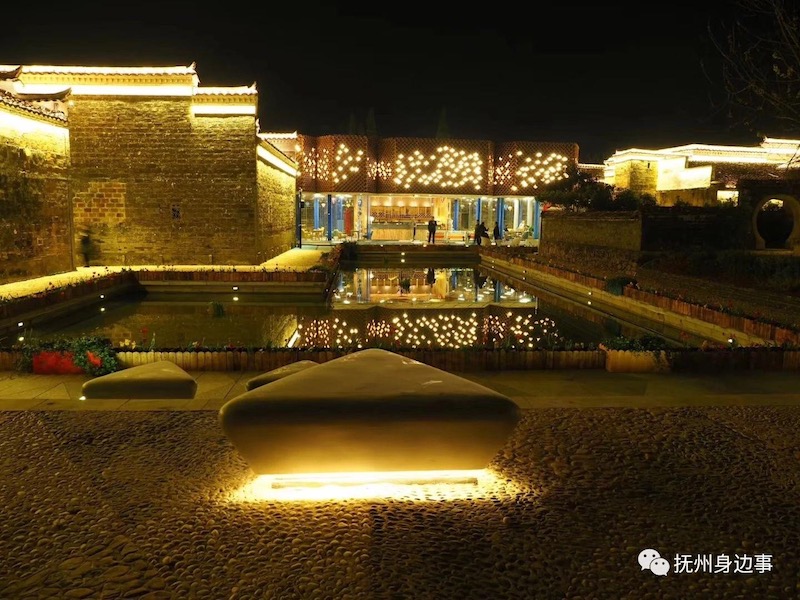