IJsfontein made two games, one after the other, for acn, the branch organisation of freight carriers in and around Schiphol Airport.

The starting point was the development of a new freight handling system that was developed at Schiphol. The first game made employees of various companies in and around Schiphol aware of their position in the chain. The second game went more deeply into the changes that the new system would entail regarding specific functions in the airport.

By playing the game, the player gains insight into how the chain works as a system and into the advantages of the services of SmartGate Cargo. During the game the player has to deal with the transport of freight at the airport, from the transporter hall where the goods come in, via the forwarder and the handler to the airline to be finally transported by air. 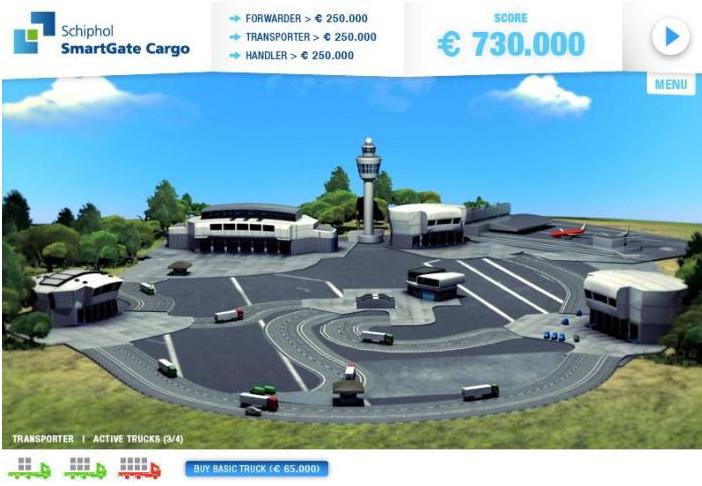 A unique feature of a game like Smartgate is the way that both parties have contributed to its making. As a game developer, IJsfontein knows better than anybody how to make a game attractive and interesting for the end user, while the knowledge of acn/Schiphol was indispensable for the content and operational aspects. In the end the cooperation has resulted in an attractive game that suits the wishes of the player and the client.

During the initial stage after the launch, both games were intensively played at all levels within the target group. Interest has waned somewhat by now, but every day there are still new players and others who come back for more. There were also players from other airports and from various logistics courses, and there was interest from far beyond the Dutch border. SmartGate Cargo is web-based and can be played by anyone free of charge.